It was the occasion of our 2nd anniversary when four Sharmas’ planned to explore North-east, India.

We had a fantastic company of Dev and Akshata who got married a day earlier than me and Trisha in the same month of Feb and year of 2018.

Me and Dev shared room during my 1st job in Mumbai and we jelled up pretty well for obvious reasons like being Sharmas’ from MP/CG and loving beer. Since we got married almost on the same day, we could not attend each other’s weddings, and this was the chance to cut it by celebrating the anniversaries together.

Tickets were booked in August’19 and we then finalized our itenary during December’19.

We read a few posts and then finally decided to book ourselves with a Freelance travel consultant from Assam.

7th Feb 2020, finally the day had come when me and Trisha embarked the road in our new Honda Amaze from Pune to Mumbai. Akshata arrange for a safe car parking over a week’s time in Mumbai. It was an early morning flight from Mumbai to Assam, we had our masks on as there was a buzz of Covid19 around the world already. Landed in Assam to find our driver, Simanta and pre-booked Innova Crysta.

None of us had slept last night but there was no sense of deprivation. It was the time to make memories, none of us had been to this side of Incredible India.

I decided to narrate this trip in multiple stories in sequence as it was a beautiful long ROAD trip.

Journey starts from plains and takes you to the mountains. Located on the Foothills of Himalayas, Bomdila could be considered as an entry point of Arunachal Pradesh. Simanta played some asamese music while driving and halted at a random café so that we can have some Momos, maggie and tea. After 1st stop Hindi music took over Assamese and we were friends with Simanta. He was a character, loved his dose of Indian tobacco(jarda or mawa) while driving and always smiling. Never said no to our demands and was a true host in all senses.

We also got a chance to Enter Bhutan Border, smart Simanta got his diesel tank full as it is cheaper in Bhutan than in India.

As we were driving up-hill the air was getting colder and heavier. We drove alongside a river stream (Kameng river), Simanta told us that it comes all the way from China to meet the mighty Bhramaputra before merging in Bay of Bengal. We will meet Kameng river multiple times during our journey through Arunachal. Just before reaching our homestay in Bomdila we purchased some liquor as it will be helpful in keeping ourselves warm during the course of journey and its cheaper than Goa in Arunachal. 🙂

Homestay was clean and economical, we had to pay extra Rs. 300/- for a room heater. That’s Ok we were happy and rich (as it was just the first day).

For dinner we walked down the stairs and found a restaurant (name forgotten), but please find it right opposite Dragon restaurant. The momos and noodles which they served were the best that we had during the trip. Please let me know the name of this restaurant in comment section. I can eat those momos all my life and die happily.

Pet-full aur dil housefull, reaching back we slept like pigs would do after spending some playfull times in the mud. Woke up to sunrise, cool breeze and blue sky – What else does a metro lad need!!

We were sporting jackets and woolens now. Simanta was ready to drive us to Tawang, the dreamland that I wanted to visit since the time I saw it in TV a decade ago.

Visited the mesmerising and peaceful Bomdila monastery, saw the little monks chanting and praying in sync. The whole atmosphere was so serene, that trying to narrate it here would be loud and might kill the serenity of the place. Check out our youtube video link below. 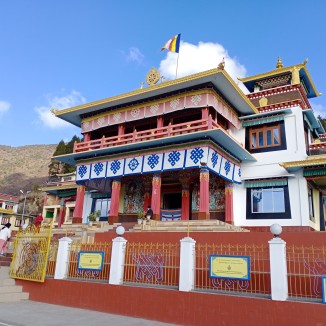 After, seeing the monastery we commenced our journey to the land of Lama. The car was cruising slowing with 2 constants, Simanta’s Mawa and Kameng river running alongside.

The drive from Bomdila to Tawang will always be extremely close to my heart because I was about to experience my 1st snow sighting.

Sela pass – You beauty!! I had heard that there is silent a kid within every adult, I was unaware of mine till I saw the 1st snow of my life. I could not stop myself and ran down the stairs, which led to a frozen lake called Sela lake.

The whole area was covered with snow we were playing, while clicking some pictures on our phones and many many more in our hearts. While we were down near a frozen lake, those stairs which we walked down seemed like a stairway to heaven. God was generous and suddenly it started to snow, we had such awesome experience before we had to run back to the car as it was a hailstorm. My 1st snow was a helluva experience. Remember the liquor that we bought last night; finally we could do justice to it using fresh snow from the sky.. 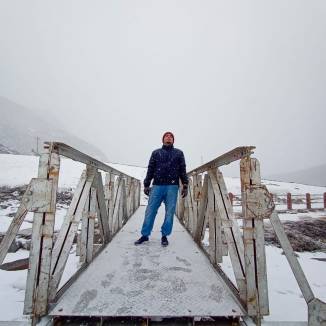 Hailstorm turned violent & we had to leave or rather escape from Sela to reach our next pit stop aka Jaswant Garh war memorial. It’s about 22 Kms from Sela and 21 Kms before Tawang.

A bit insight about the memorial – Jaswant Garh is a famous tourist attraction in Arunachal Pradesh and it is widely visited all year round. It is dedicated to the warrior, Jaswant Singh Rawat who was killed during the Indo-China War in 1962. He was an Indian rifleman of 4 Garhwal Rifles, Uttarakhand and for his bravery; Jaswant Rawat was honoured by a memorial at the post where he fought the Chinese army. This magnificent memorial is well kept at an altitude of about 10,000 feet. A small canteen is run by army personnel offering free tea / coffee and hot water to all visitors to keep them warm in cold weather. It is unbelievable in today’s world of worshiping money as God, where almost everyone is running behind money and becoming rich leaving behind empathy towards fellow humans. We relished dosa and idli in Arunachal at such height, it still have the taste in my head while I write about it. My wife, Trisha loved the patty and muffins. 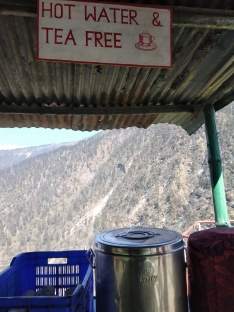 Last but not the least; there is a small shop from where you can buy jackets, socks, gloves, caps, etc to withstand the negative temperatures of Tawang.

The memorial is surrounded by beautiful valley perfect to gaze on while sipping your unlimited free tea. 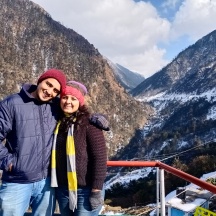 Hopped back in the innova with happier Simanta, he already had starting chewing mawa.

We reached Tawang in another 1½ hours, the sun sets early and it was almost dark by 5pm when we reached. While, Dev was co-ordinating with the pre-booked homestay owner we had some difficulties in locating the stay. Finally, have found the homestay just to realise that staying there was not a good idea. It was located far away from town in a dark and abandoned area. Girls felt some safety concerns, and we had to honour this being responsible companions. Simanta’s “never say never” attitude and always smiling face helped us find a hotel in the market area. Name of the hotel is Mon Paradise. It was freezing cold, we quickly changed and reached the lobby area with our packed food and theplas. The hotel guys were happy to heat those for us and serve it with dal, egg bhurji and rice which we ordered from them. Sharing our food with a soldier from Indian Army with a lot of border stories was the best thing that we could have thought of in this trip.

Pet-full aur dil housefull, reaching back we slept like pigs would do after spending some playfull times in the mud. Woke up to sunrise, cool breeze and blue sky – What else does a metro lad need!!

Hope you liked our journey till now! Write some encouraging words in the comments section and share the link with your friends, also ask them to share and comment…

Read the part#2 of the story to see Tawang and Dirang from our eyes.